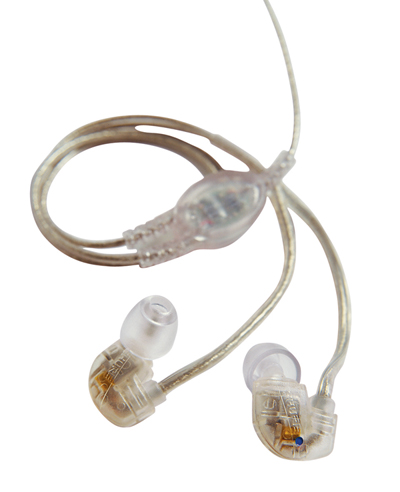 It is well known that sound isolation is very key when designing in-ear monitors or earphones. Blocking ambient noise from entering the ears allows the listener to hear the smallest musical details while keeping the volume at a much lower level than with typical headphones. Listening to music at a lower level greatly reduces the risk of hearing loss. Earphones are also more portable because they are substantially smaller than headphones. I’ve been using Shure’s entry-level E2c earphones for entertainment and professional purposes for over a year now so I was excited when I got the chance to evaluate the high-end E5c earphones. So how much better were these puppies?

The Shure E5c earphones differ in design from the E2c earphones because they use a dual driver configuration inside each earphone, instead of the single drivers found in the E2cs. Interestingly enough, they are slightly smaller than the E2c earphones. An inline crossover sends high frequencies to one driver and low frequencies to the other. This dual driver design has a significant advantage in frequency extremes and dynamics.

Included with E5c earphones is a pair of disposable foam sleeves, a pair of triple flange sleeves, three pairs (small, medium, large) of flex sleeves, and three pairs (small, medium, large) of soft flex sleeves. These sleeves ensure a personalized and secure fit, so that the earphones won’t fall out of your ears even during intense physical activity. For the ultimate fit and comfort, these earphones are compatible with custom molded sleeves that can be ordered from a hearing specialist. The E5cs come with volume level control that allows for comfortable listening from any high-output audio source, such as airplane armrests.

When I first put the E5c earphones in my ears, I noticed how fundamentally different they sounded from the E2c models. They sounded so natural as if they weren’t earphones at all. Nothing stood out artificially on well-balanced recordings. As I settled in, the details and the space of the recordings that I listened to became remarkable and infinite. The Shures produced a soundstage with the width, depth and three-dimensionality that blew me away. The E5cs played with the fluidness of real acoustic spaces throughout the entire audio spectrum. The dynamics had a sense of movement much like real-life sounds. The E2c models had a slightly rolled-off high frequency range. With the E5cs however, this no longer appeared to be an issue - having a dedicated driver to handle the highs surely had something to do with this. The highs were crisp, precise and delivered the subtlest of the details in all the songs that I played. The mids were nothing short of life like. When I listened to a selection of hip-hop and electronic albums I was stunned at how deep and snappy bass sounded on these earphones. The E5cs resolved bass with an amount of detail that I would not normally associate with earphones. When I used the earphones while DJing at a local club, I could easily back cue records that started on the lowest bass notes. I heard bass notes that I never even knew were there before. I can’t think of another pair of earphones that I have listened to that combined the isolation and sound quality like these E5cs.

I have heard more expensive (over the ear) headphones that can sound better when used in a quiet room but the E5cs can boom with your iPod anywhere you go. Using good sound isolating earphones outdoors in a busy city like Toronto certainly has its advantages as well. When most ambient noise is blocked from you ears, pretty amazing experiences can be had when certain types of music interact with the environment around you. I used the E5c earphones with my iPod on a bike ride along the lakefront. During an electronic recording with some tape echo effects and reverbs, I experienced an out of this world illusion - time suddenly became slower and my bike melted into the pavement. I suppose it was the right sounds at the right moment, with perhaps a bit of imagination. Eliminating outside noise can really go a long way, especially during outdoor activities. If you want a non-narcotic trip, load your mp3 player with some trippy music and go for a run or a bike ride with the E5cs!

The Shure E5c models are exceptional in-ear monitors can easily make you experience music, instead of just listening to it. But don’t expect a quick two minute listening session to show you just what they are capable of. Sit down for a few minutes and you will be continuously rewarded with layer upon layer of sound and effortless dynamics. It’s the kind of sound quality that has to be heard to be believed. At $549 US, the E5cs are slightly pricey however when considered that their sound quality is that of a speaker set worth a good several thousand dollars, the price becomes justified. The E5cs could put headphones many times their price to shame. The health benefits of the E5cs when compared to generic ear buds should also help to justify the cost to those who often use earphones. I fell in love with the Shure E5c earphones during the few weeks that I had them and can’t think of using any other earphones now, let alone returning them to Shure!