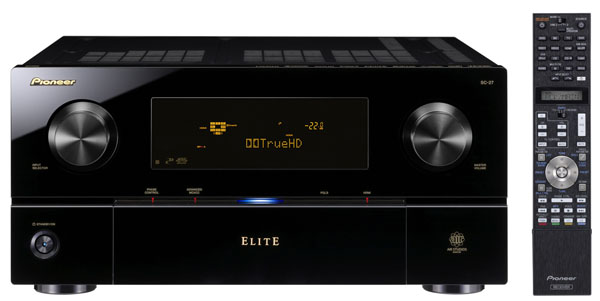 There’s a commonly repeated axiom among many AV enthusiasts which says that even the most cutting edge TVs and playback components become obsolete every 5 years or so. Good quality AV receivers and speakers on the other hand can last for decades. Technology in the former areas moves so fast that what is cutting edge today can often be surpassed by budget oriented offerings only a few short years down the road, while the basic design tenets and operating principles of the latter haven’t changed since long before I was born. The role of the AV receiver has evolved much over the years. From humble beginnings of simply selecting between and amplifying a few audio sources, today’s AV receiver is often, quite literally, the heart of a home entertainment system, with oftentimes every single component in the home plugged into it, up to and including cell phones, satellite radio and computers.

Pioneer recently released the Elite SC-27, aimed squarely at the upper echelon of the AV receiver market. It boasts 7 x 140 watts of power (all 7 channels driven), THX Ultra2 certification (designed to produce reference level output in rooms 3000 cubic feet and larger), 1080p up-conversion of analog sources, a plethora of input/output options and a not-insignificant $2499 price tag. The SC-27 has all the processing options you would expect to see in an AV receiver including Dolby Digital Pro Logic IIx, DTS-Neo 6 and various THX Ultra2 listening modes. Of course it also decodes all the latest uncompressed formats such as Dolby TrueHD and DTS-HD Master Audio. In addition to all this, it boasts a new feature called THX Loudness Plus, which purports to automatically adjust the level of your surround speakers when you are listening at levels lower than the reference level, in order to not miss any details in the rear and side surround fields. Those listening to older, lower bitrate, sources will appreciate the SC-27’s onboard Burr-Brown sampling rate converter, which up-scales all analogue and digital signals to 24 bit/192 kHz sampling rates. The SC-27 also features a Class D amplifier stage to deliver high power output while minimizing wasted energy lost in the form of heat. This results in the SC-27 being one of the “greenest” and most energy efficient AV receivers on the market today. This AV receiver also features “Works with iPhone” certification, allowing you to connect your iPhone via the included docking cable and browse your playlists via the SC-27’s on-screen display, with album artwork even displayed on your TV.

The SC-27 weighs in at just a hair over 40 pounds, well above the average weight for most AV receivers. Upon opening the box, I was met with a fairly beefy receiver - the SC-27 measures about 17-inches wide by 8-inches high by 18-inches deep. The AV receiver’s front panel is finished in a rich, lush glossy piano black finish, not dissimilar to other Elite components. The LED display glows a gentle orange, and has four levels of brightness including an “off” setting, so as not to call attention to itself while the viewer is immersed in a film. A cursory examination of the SC-27 revealed it to feel exactly like a receiver of its pedigree and price point should. Both front panel knobs operated with a silky smoothness and every connector I tested on the back fit perfectly with its corresponding plug, without any connections feeling loose or sloppy. While at the back of the SC-27, I connected and my reference 7.1-channel Klipsch Synergy speaker system (F2 front stage, S2 surrounds, C2 centre channel, B2 rears and a Sub 10 filling in the low-end).

Connectivity on the SC-27 is plentiful, with every consumer-level interface imaginable present, ranging from simple composite video right up to five (one on the front panel) HDMI 1.3 inputs. I connected my PlayStation 3, Xbox 360 and my Rogers HD PVR to three of the available HDMI inputs, and plugged an original Xbox into one of the three component inputs. Then I connected the SC-27 to my ISF-calibrated Pioneer PDP-6010FD display via one of its dual HDMI outputs. In a setup with a single display, the second HDMI output is superfluous, but if you have both a flat panel display and a projector, the second HDMI output is indispensable. Upon firing up the SC-27 for the first time, the first thing I noticed was a very well-appointed, backlit (!), learning remote control. It has long been a minor peeve of mine that AV components that carry four digit price tags often ship with a remote that 1988 would be embarrassed to call its own. The SC-27’s remote not only has backlit buttons, but a small backlit LCD screen which displays the currently selected input name.

The SC-27 ships with a microphone that is used in conjunction with the on-board Advanced MCACC calibration system to properly tune the AV receiver for each particular room it finds itself in. Engaging the AV receiver’s “Home Menu” to initiate the MCACC setup I was met with my second pleasant surprise, as the on-screen display of the SC-27 sported a lovely, full colour, graphical user interface. I browsed through the menu to trigger the advanced MCACC and then stepped back out of my listening area to let it run its course. Over the next several minutes, the SC-27 fed itself a loud series of tones, clicks, pops and white noise bursts to establish speaker size, distance, EQ settings, reverb and phase control. Once the MCACC had run its course I played a few selections from several CDs that I am intimately familiar with, and made a few small adjustments to speaker trim, distance and EQ. After living with the SC-27 for a few days to allow it to break in, I sat down with my stack of reference material to really get a feel for this high-end AV receiver.

With the PS3, Xbox 360 and PVR connected via HDMI, the SC-27 operated in “passthru” mode, with no alteration of the digital signal being performed. The video controls on the SC-27 are completely defeated on any input when the source is connected via HDMI. Switching the AV receiver to the analog component video input, where my HD PVR was connected, allowed me to fiddle around with the various video processing options available on the SC-27. Analog sources can be up-scaled to 480p, 720p, 1080i or 1080p, and the SC-27 also features a full set of picture controls (contrast, brightness, sharpness, etc.) along with noise reduction and an aspect ratio control. During normal viewing, I wasn’t able to distinguish much between having the SC-27 scale a 480i signal to 1080p, or passing the same 480i through unchanged and allowing my plasma to do the scaling. Given the caliber of the video processing in the Pioneer PDP-6010FD display, I would say that’s a very glowing endorsement for the SC-27’s capabilities as a scaler. While the AV enthusiast willing to pay $2500 for a receiver probably doesn’t have all that many analog devices still kicking around in their rack at this point, it’s nice to know that the SC-27 excels at this, as some among us might still want to watch the odd VHS tape.

I grabbed a number of Blu-ray discs with what I consider to be outstanding sound quality, starting with the Directors Cut of Zack Snyder’s “Watchmen”. This film is a contender for the best mixed soundtrack I have ever heard, with a monster dynamic range, clean, crisp tonally-matched dialogue, loads of LFE - all backed by a fantastic score by Tyler Bates. I was blown away by how punchy and dynamic the SC-27 was, even at molar-rattling volume. No matter how intense the soundtrack seemed to get, if the SC-27 was called upon for more, it responded with great ease and never seemed to sound strained. Dialogue was crystal clear throughout the whole film, regardless of what else was occurring on-screen, and never sounded tinny or “boxed in”. I was able to watch the whole film at reference level on the SC-27’s volume dial (much to my neighbours chagrin, I’m sure) without any distortion or unpleasant artifacts. I engaged the THX Ultra2 processing but, as my speakers are not THX-certified, I found it to minimize my side and rear surround field so I quickly turned it off. Disappointingly, the THX Loudness Plus feature only works when the THX processing is turned on, so I wasn’t able to fully appreciate it either, although the principle itself is sound in theory. I also skimmed through several key chapters on other BDs that I’m well acquainted with and consider to have outstanding sound quality and was never left wanting more from the SC-27. I heard numerous discrete sounds around and behind me during the jungle scenes of Mel Gibson’s “Apocalypto”, and was almost overwhelmed by the sheer onslaught of sound during the chapter when the prisoners are being lead into the city. I also noted the level of detail present in “V for Vendetta” as Hugo Weaving’s voice was just a tad muffled compared to the other characters, since he is always speaking from behind his Guy Fawkes mask.

While movies and TV make up about 70 percent of my AV receiver use, I am also a huge music fan, so I chose a few selections and sat down to run the SC-27 through its paces in this arena as well. Tool is one of the few remaining bands who don’t subscribe to the “loudness war” when mastering albums. Their last album “10,000 Days” is an incredibly well-mixed work with pounding, complex drumming, deep, throbbing bass, aggressive guitars, and is topped off with Maynard James Keenan’s unique and distinctive voice. Much like my impressions when watching films, the main thing that struck me when listening to music on the SC-27 is the impression of extreme power. Even during the most manic crescendos, the SC-27 handled itself perfectly, never breaking up or distorting under load. The soundstage was well-defined and deep, with Maynard’s vocals at times front and centre, at other times more subdued, mingling with the layers of guitars and FX. Stereo separation was at a premium, with the various parts of Danny Carey’s drum kit all occupying their own space in the expansive soundstage. I next auditioned several tracks from BT’s “This Binary Universe” album, a downtempo electronica album written, performed and mixed entirely in 5.1. I engaged the SC-27s DTS NEO-6 Processing here in order to extract rear channel info from the two existing surround channels, and was impressed with the separation between all six channels. I truly was immersed in the album, as tracks like “The Antikythera Mechanism” grew steadily from delicate piano lines to thundering sampled drums and full orchestral string sections. I also listened to selections from James Newton Howard and Hans Zimmer’s “The Dark Knight” score. The blend of electronic synths and orchestral parts on this album make it a unique challenge to reproduce, but I am happy to report that the SC-27 rose to the task nicely, faithfully reproducing Zimmer’s aggressive electronics without muddying Newton Howard’s delicate strings.

After living with the Pioneer Elite SC-27 for a few weeks, I would be fully comfortable recommending it to anyone looking for a powerful, high-end AV receiver. I know my reference system intimately well, and over the time I auditioned it for review, I heard dynamic range from my speakers that I didn’t know they had in them, and a thickness and bite to the sound which surprised me, even given how familiar I am with all the source material I was using. If you are on the hunt for a new “heart” for your home theatre setup and would like it to offer great power, extensive connectivity and ease of use in a gorgeous, well built package then you owe it to yourself to check out the SC-27.