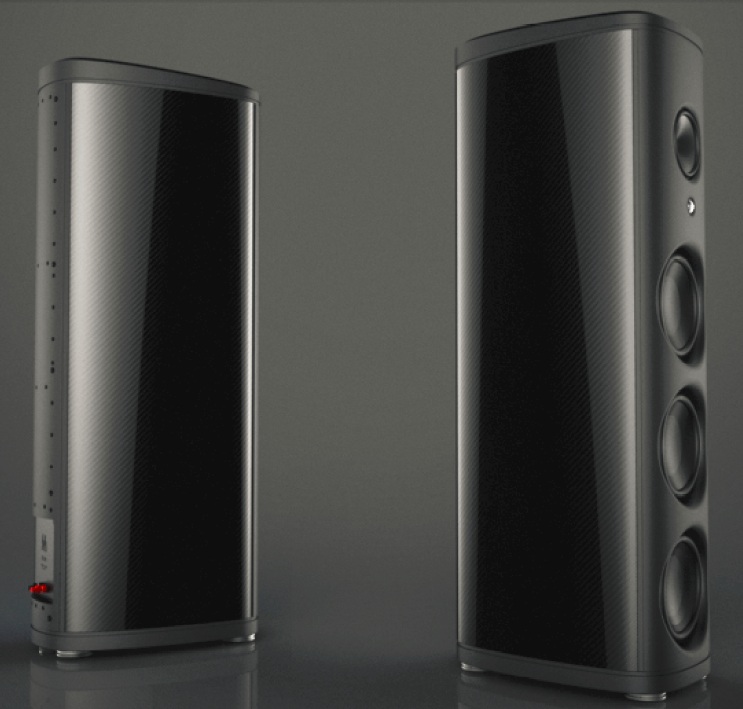 Magico has just announced the release of the M Project, a limited-edition loudspeaker with production run of just 50 pairs.   The M Project is a three-way, five-driver floorstanding loudspeaker, that reflects motifs from the Q series, the original Mini, and the new S series but with a newly designed curved shape.  The new shape minimizes internal resonances and requires minimal damping.  The new front baffle contour has edgefree top and bottom plates that combine with a new aluminum skeleton topology enclosue, acoustically optimized front plate, and carbon-fiber sides.

The M Project features a new tweeter that is a net-new design utlizing a diamond-coated beryllium diaphragm with optimized geometry.  Using state-of-the-art technology, the dome diameter has bee increased to 28mm (vs. the current 26mm), which improves on performance, while providing for greater power handling.  The new dome is combined with a new motor system in a new acoustically improved back chamber - providing what Magico claims as “the lowest distortion possible today in a high-frequency transducer.”

The bass and midrange drivers of the M Project are designed to achieve optimal behavior in each driver’s frequency range, raising the peformance bar.  This feat was acheive through the use of the latest 3D laser scanning techniques.

The midrange driver, derived directly from the Q7, is a 6” unit with a 55mm voice coil coupled to a new Magico Nano-Tec cone. It utilizes an underhung neodymium base motor system using an extra-large magnet (OD=120mm, 10mm in height, N48H grade) and a top stabilizing magnet to get a super stabilized magnetic field of 1.7 Tesla in a 15mm air gap, resulting in a pure vented titanium voice coil. The M Project midrange has +/- 6mm of stabilized excursion at very high sensitivity, enabling 120dB (at 1m) of distortion-free playback in the midband.

Also created exclusively for The M Project is our new 10” driver, using a new Magico Nano-Tec cone. It leverages a new magnet system with half an inch of linear movement to produce clean and accurate low frequencies, undistorted even at a very high maximum SPL (120dB @ 50Hz at one meter), while maintaining an incredibly low inductance of <0.15 mH.

All five drivers are masterfully integrated using Magico’s exclusive crossover topology, resulting in the M Project achieving the best room integration possible in the low frequencies, while delivering the lowest, loudest, cleanest reproduction with ease of drive regardless of amplifier.

The Magico M Project loudspeaker will have a price of $129,000 U.S. /pair, with delivery to begin this October.  Look for more details at: http://www.magico.net/.

North by Northeast (NXNE) Is Coming To Toronto June 13-22! MiO Squirtcar Promises To Be NXNE’s Most Original Venue