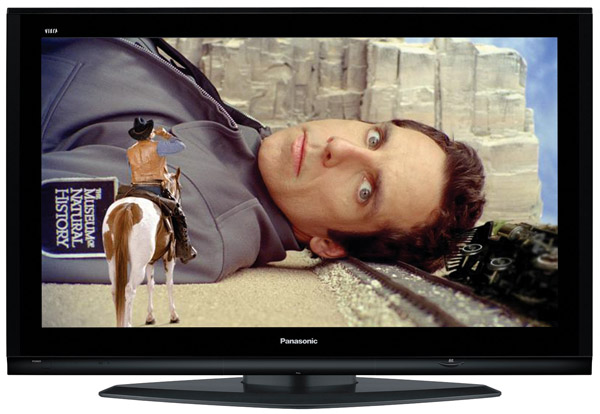 If nothing but the best picture performance will satisfy your hungry eyes, there are several new TV features and technologies to look out for in the latest TV sets. The hottest TV tech currently available includes 1080p resolution, HDMI 1.3 connectivity, Deep Color, 120 Hz video refresh rate, the ability to display 24 frames per second (fps) and LED backlighting. A couple of TV manufacturers - Pioneer and HP - are now offering their latest sets with built-in media streaming capabilities. What exactly do these features mean to you? Let’s take a closer look at each of these new technologies.

To enjoy the sharpest, most detailed picture available today, you’ll need a television that can display the full 1080p high-definition resolution (1920 x 1080 pixels). To take full advantage of the TV’s 1080p resolution, you’ll need to feed it a 1080p video signal from a Blu-ray or HD DVD player. A 1080p TV set with a high quality video processor can also properly deinterlace (substantially improve) a 1080i signal from a satellite or digital cable receiver. The advantages of 1080p resolution are particularly noticeable on 42-inch or larger TV sets - 1080p is difficult to resolve for the human eye on smaller screen sizes, unless you’re really close to the screen. In order to view the full 1080p resolution you will need to use an HDMI cable between the source and the TV set. Be aware of any marketing jargon - a 1080p-compatible TV may accept the 1080p signal and down-convert it to the TV’s native resolution, instead of displaying the 1080p signal pixel-for-pixel. A true 1080p TV must have a screen resolution of at least 1920 by 1080 pixels.

The latest version of the High-Definition Multimedia Interface, HDMI 1.3, came with the arrival of the Blu-ray and HD DVD formats. This new version doubled the bandwidth from 165 MHz to 340 MHz over previous versions of HDMI. This translates into an increase in bitrate from 4.9 Gbps to 10.2 Gbps, allowing the maximum bit depth of colour to go from 8 bits per channel to 16 bits per channel. While previous versions of HDMI allowed for a maximum of 17 million colours, HDMI 1.3 allows for 2800 Trillion colours, a feature dubbed Deep Color.

Video refresh rate capability of up to 120 Hz is also an upgrade over the 60 Hz of previous HDMI versions. And even though it’s way in the distance, HDMI 1.3 also supports the 1440p resolution. Finally, HDMI 1.3 also offers support for the much anticipated lossless audio formats Dolby True HD and DTS HD Master Audio - although the audio capability of HDMI 1.3 is not relevant to a TV set, but rather an A/V receiver.

Be aware, that a TV set that has HDMI 1.3 inputs does not necessarily mean that it is capable of displaying Deep Color or that it offers a video refresh rate of 120 Hz. Unless these features are explicitly mentioned, the TV likely doesn’t offer them. A good number of TVs will be available with HDMI 1.3 inputs by the time you read this; TVs with Deep Color will be available by the end of 2007. Don’t hold your breath for Deep Color however as it will likely be years before movies will begin to appear with Deep Color.

Click here to learn more about HDMI, and its different versions.

Film material, as in movies, found on standard and high definition discs are filmed at 24 frames per second (fps). Video material, such as TV shows, documentaries and news, on the other hand are shot at 30 fps. The vast majority of TVs and projectors available today are designed to display material at 30 fps, the frame rate of video material. To display 24 fps material, TVs perform what’s called a 3:2 pulldown process - which involves taking the original 24 fps material, interlacing it, and duplicating and combining interlaced fields to generate the extra frames required for a 30 fps rate. Unfortunately, performing the 3:2 pulldown often introduces jaggies (stair stepping in diagonal edges), jutter (an unsmooth motion) and other picture artifacts. But this is all changing now thanks to displays that accept the 24 frame rate natively.

In 2006, Pioneer became one of the first companies to introduce a plasma display capable of displaying material at 24 fps, as it was originally shot on film, in addition to also playing 30 fps material. Displaying 24 fps means that no extra frames have to be generated. This results in smoother motion and elimination of jaggies, judder and other associated picture artifacts. Currently less than a dozen 24 fps plasma displays are available but more are on the way this year.

In order to enjoy material at 24 fps, you will need both a 24 fps display and a high definition disc player that can output 24 fps. Currently three Blu-ray players are capable of producing 24 fps - Sony’s BDP-S1, Pioneer’s Elite BDP-HD1 and Samsung’s BD-P1200 (reviewed in this issue). Supposedly, a future firmware update will allow the Sony PS3 to output 24 fps. Toshiba has also promised a firmware update for their high-end HD-XA2 HD DVD player that will allow it to output 24 fps. More 24 fps players are expected out this year.

Increasing the refresh rate from 60 Hz (or 60 times per second) to 120 Hz offers a double benefit for LCD TVs. First, they can now display both 24 and 30 fps content, since both these numbers divide evenly into 120. Secondly, this higher refresh rate also helps to reduce motion blurring, which all LCD TVs suffer from to a certain degree. But increasing the refresh rate alone, isn’t enough to create smoother motion. There are a number of ways in which LCD TVs can achieve a 120 Hz refresh rate. One method is to insert a black frame between all real frames. Another method simply repeats individual frames as many times as required to generate 120 frames per second (this depends on the frame rate of the original signal, i.e. 24, 30 or 60 fps). The most advanced technique interpolates (creates) frames to place in between the 60 frames of video. These newly created frames are interpretations of what the picture would display, if a real frame was present. By the time you read this, most major LCD TV manufacturers will have their 120 Hz TVs on the store shelves. Many new models will be introduced before the end of 2007.

Most of today’s LCD TVs rely on cold cathode fluorescent lamp (CCFL) backlights. Rear projection TVs (RPTVs) use incandescent bulbs. Substituting these traditional lamps/bulbs with LED backlighting allows LCD TVs and RPTVs to produce a significantly wider colour range (also refered to as the colour gamut) - in excess of 100 percent of the NTSC specs for HDTV. The use of LED backlighting in rear projection TVs also eliminates the need for a colour wheel, which can produce an undesirable “rainbow” effect on the screen. LED backlights offer a lifespan that’s comparable to today’s CCFL backlights, which is much longer than incandescent bulbs used in RPTVs.

The biggest stumbling block for LED backlighting has been the high cost of production. A number of manufacturers were hoping to start producing LED backlit TVs in large volume before the end of 2006 but the production costs have prevented this from happening. Currently less than a dozen rear projection TVs (most from Samsung) and only a handful of LCD monitors on the market offer this technology. However, as the cost of LED backlights continues to drop we can expect to see this technology to become commonplace in near-future LCD TV and RPTV sets.

As the number of people downloading video and music from the internet continues to grow, so does the need for a simple way to view this content on the big screen TVs in the living room. An external digital media receiver will allow you to stream HD video, photos and music from a computer to your TV - but it’s not exactly an easy solution. It requires you to add yet another box and remote control to your setup and can often be a challenge to setup for the first time.

Pioneer and HP have realized this and introduced TVs with digital media receivers built right into the sets. The Pioneer Elite PRO-940HD connects to your home network router via a wired cable connection, while the HP SLC3760N gives you the choice of a wireless or wired connection to the router. Both TVs offer a simple way to access the digital media stored on any computers connected to your home network. They don’t require the user to set up any additional hardware and use the TV’s remote to access the digital media. It couldn’t be simpler!

Will more TV manufacturers be introducing sets with built-in digital media receivers? I suppose we’ll have to wait and see.